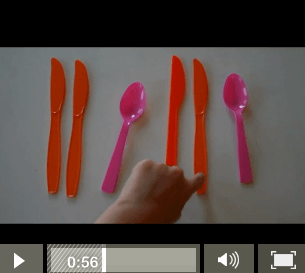 This activity for kids introduces the concept of visual and auditory patterns created simultaneously (e.g. the sounds of with the visual representation of).
Patterns are incredibly important, both to music and math. Children first notice and recognize patterns, then develop the ability to complete partial patterns, duplicate patterns, and eventually to extend and create patterns. The patterns also go from simple (ABAB) to more complex (AAB, ABB, AABB, AAABB, AABC, and so on).
The Ti-Ti Ta pattern includes another layer of complexity: duration. Rather than a simple red-red-green pattern in which all components are equal, a Ti-Ti Ta pattern contains the concept of short-short-long within it. When the pieces are rearranged, the “notes” are rearranged as well. Ta, ta, ti-ti, ta is more complex than green, green, red, red, green because the concept of a pair of eighth notes (each of which is half as long as a “ta,” or quarter note) is embedded in the ti-ti.

This game for kids introduces them to the sound of the quarter note and the “no-sound” of a quarter rest. Children test their ears on how well they recognize them when they’re assembled in patterns.

Find out more about the connections between music and math in Kindermusik at www.kindermusik.com.