Inspiration drives success. While studying in Cologne, Germany, Kindermusik founder Dan Pratt discovered a curriculum that empowered young children to learn through music. Determined to bring this pedagogical approach to families around the world, he introduced the first Kindermusik classes in 1978. Steeped in educational theory, Kindermusik's research-based curricula recognizes the potential in every child and sets a strong foundation for a lifetime of learning.

Today, our programs and educators continue to recognize and celebrate the potential in every child, working to enhance knowledge, confidence and enthusiasm for learning through the power of music-making.

We live to spread the power and joy of music-making as a vital learning experience for young children and families.

We believe the earlier a child is introduced to singing, instrument play, and joyful movement the further they will go.

We should know. We’ve been transforming the lives of children around the world for the last three generations.

And we’re just getting started.

Kindermusik Through The Years

The first Kindermusik early childhood music and movement classes are shared with children and their families.

Kindermusik undergoes a growth spurt, expanding its offerings around the globe.

Kindermusik founder Dan Pratt retires from the company, but stays on as Chairman of the Board of Directors. Michael Dougherty becomes President and CEO.

Employees purchase Kindermusik International from its investors to create a 100% employee-owned company.

In response to the rise in preschool and early childhood school attendance, Kindermusik launches school programs to serve the needs of children in preschool settings.

Kindermusik introduces recycled product packaging as well as eco-friendly practices and products as part of a massive, company-wide sustainability initiative.

An independent study finds that three-year-olds using Kindermusik made literacy gains that were 32% higher than the control group over a nine-month period.

Discover the power and joy of music-based learning.

Find a Class Near Me 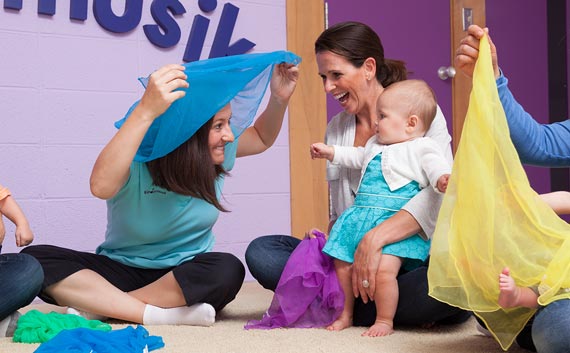 We’re seeking people with a passion for developing young minds, talents, and creativity to bring Kindermusik to children and families around the world.

Interested in opening your own Kindermusik studio, adding Kindermusik programs to an existing business, or bringing our research-based curricula into a school?