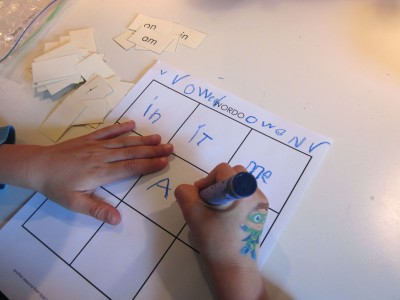 In. It. Me. He. Unless you work in the early literacy and language development arena, those four little words are, well, just four little words. However, early childhood teachers recognize them—and 90 plus more—as “Kindergarten High Frequency Words” in conjunction with the common core state standards. According to the Common Core Language Arts, children in Kindergarten will learn to read these words by sight.

Even people outside the early literacy field recognize that children and adults read differently. Early readers depend on phonemic awareness to carefully sound out each word. Eventually, children learn words by sight and can read without delay. Now early literacy development research indicates that early word acquisition can lead to better reading skills as an adult. By measuring the age at which children learn words, Dr. Tessa Webb wanted to uncover why the reading patterns of children differs from that of adults.

“Children read differently from adults, but as they grow older, they develop the same reading patterns,” Dr. Webb explained in a press release. “When adults read words they learned when they were younger, they recognize them faster and more accurately than those learned later in life.”

In Dr. Webb’s early literacy research, 300 children read aloud both familiar and unfamiliar words. Fifty percent of the words followed spelling to sound rules, whereas the other half did not. Dr. Webb’s research showed that children in the early school years read words differently from adults, but by age 10, children’s reading patterns mirrored that of an adult. Dr. Webb sees this research as an important first step in connecting word learning age to both early literacy success and later reading abilities as adults.

ABC Music & Me uses music to help children build early literacy and language skills, including vocabulary acquisition. The stories, songs, and music and movement activities introduce students to hundreds of words and their meanings. In this common core curriculum, the picture vocabulary cards support unit-by-unit vocabulary, comprehension, and memory.

For more information about using our standards based curriculum, ABC Music & Me, to boost early literacy and language development, email us at info@abcmusicandme.com.