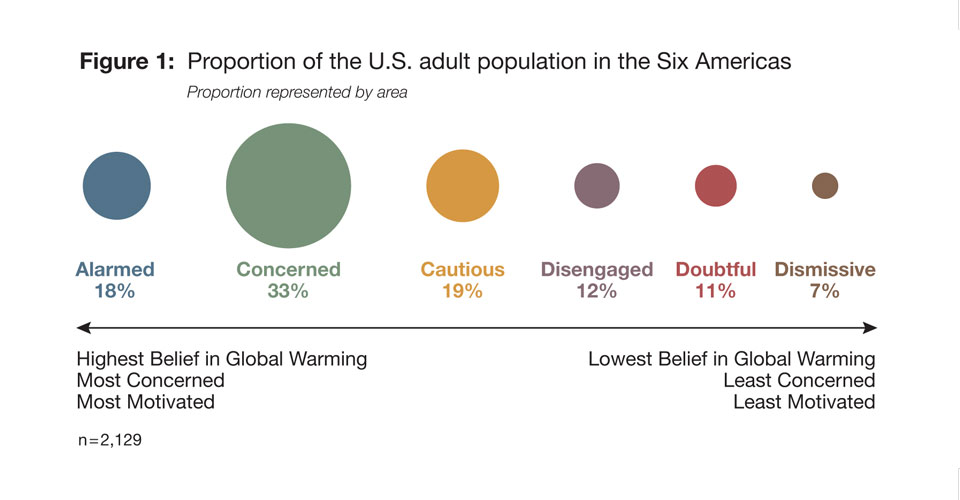 From the Yale Project on Climate Change, one of our favorite environmentalists, Bill McKibben, reports a seasonably heart-warming “Moral Math” graph showing the “six Americas” of national attitudes towards global warming. 33 percent of Americans feel “concerned” by the state of the environment, and would describe their attitude as such:

[They] are also convinced that global warming is a serious problem and support a vigorous national response. Members of this group have signaled their intention to at least engage in consumer action on global warming in the near term, but they are less personally involved in the issue and have taken fewer actions than the Alarmed.

Who are the “alarmed” you ask?” 18 percent of self-identified “alarmed” Americans have made big lifestyle changes in order to appease the “urgent,” “human-caused” threat of global warming. On the opposite end of the spectrum, the “dismissive” actively refute the evidence of climate change and refuse to participate in the shifting culture and consumerism of green living. …Luckily, they only represent 7 percent!

Whether your in the United States or beyond: where do you fall in the graph? Tell us by commenting below.

And don’t forget that FRIDAY, December 7th, is the last day to submit YOUR sustainability efforts to our Facebook page (or comment below) for a chance to win the Kindermusik Green Competition! 50 free songs, $100 to your charity of choice, and a chance to inspire our community by having your efforts posted on Minds on Music!