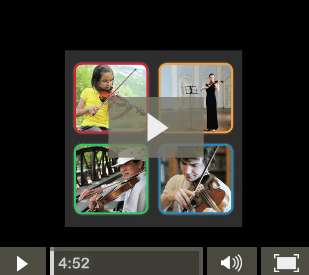 Matching sounds to a visual image is an extremely important early literacy skill. It is, in fact, the precursor skill to the alphabetic principle, or the understanding that there is a relationship between letters and sounds. Before children can explore letter-sound relationships and learn to decode words, they must first understand the connection between a sound they hear and an image they see.

This fun early literacy game from Kindermusik@Home features violins and provides kids lots of practice with associating a specific bit of audio with a specific bit of visual. While kids have no idea that this game is actually preparing them to read, YOU will know!