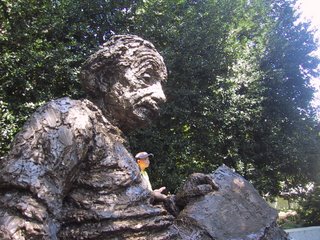 This article was written by Kindermusik educator Helen Peterson. Helen’s Kindermusik of the Valley program, located in and around the twin cities, MN, is one of the top programs in the world. Enjoy this little vignette!

A few years ago, Tucker and I took a quick trip to W

ashington D.C. and, like thousands of other tourists, I made him sit in Albert Einstein’s lap for a picture.

Albert Einstein’s schoolteachers told his parents that he was “stupid” and simply couldn’t learn. They urged his parents to take him out of school.

What did his parents do instead? They bought him a violin. It was a turning point.

In later years, Einstein would turn to his violin while trying to work out his scientific problems and formulae. Once, when asked about his theory of relativity, Einstein explained, “It occurred to me by intuition, and music was the driving force behind that intuition. My discovery was the result of musical perception.”