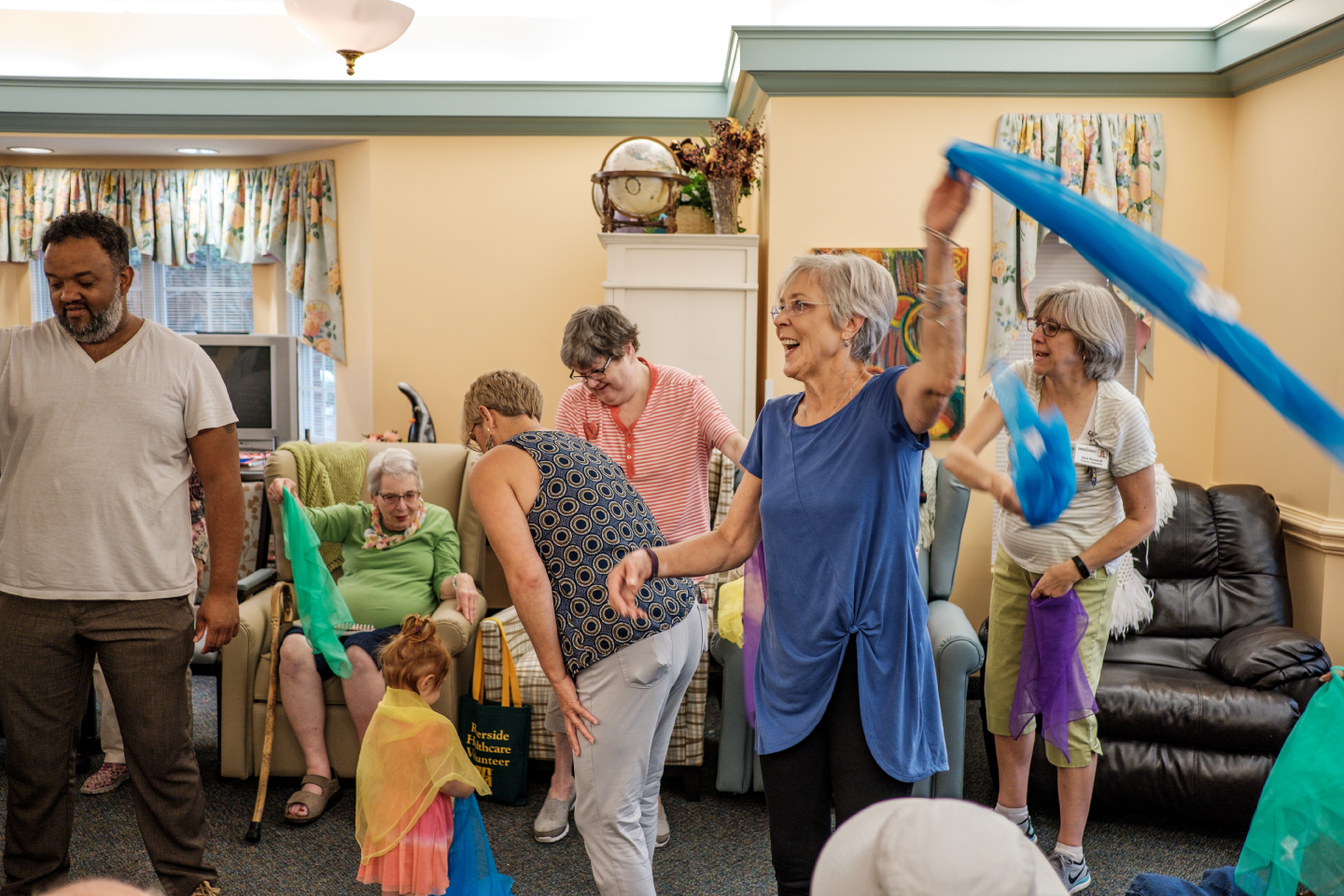 In honor of Grandparents Day, we’re giving you a sneak peek at an exciting new Kindermusik program that celebrates the special relationship between seniors and young children. For this blog entry, Deanne Kells, VP of Product Development for Kindermusik International, shares why this program has personal resonance for her.

Not long after I began working at Kindermusik last December, I had the pleasure of attending a session held at the Elizabeth and Tab Williams Adult Day Center in Winston-Salem, North Carolina. This session featured toddlers and seniors enjoying a music- and movement-based experience together. Sponsored by Kindermusik and held weekly at the Center, these experiences were of special interest to me for several reasons. 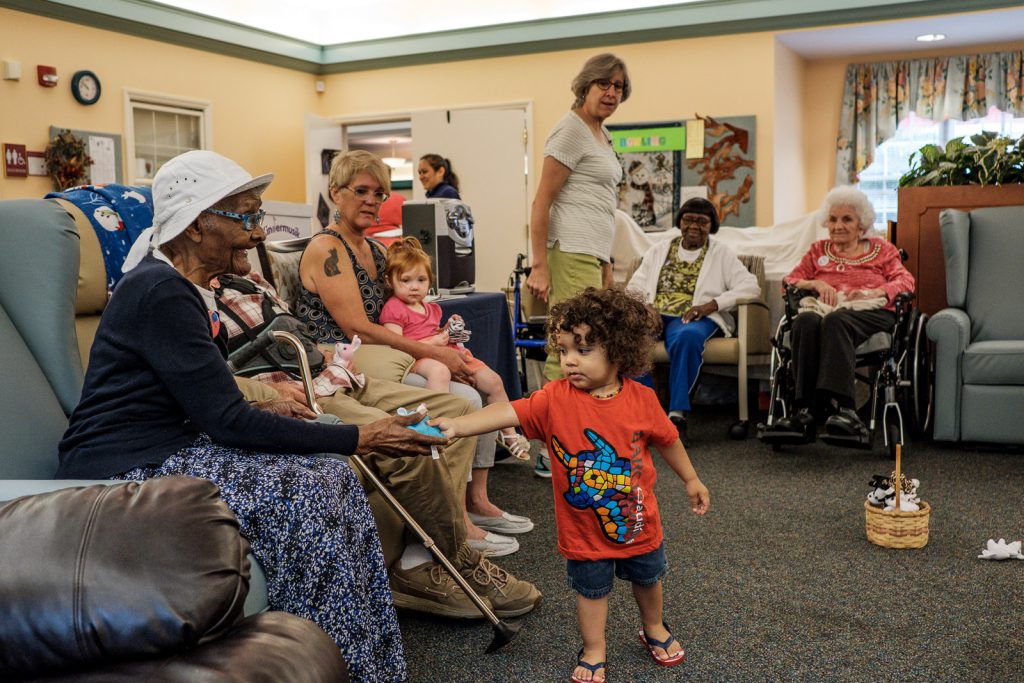 The first reason is personal. Three years ago this month I lost my father to complications from Alzheimer’s. It was a long battle that he fought, and it was absolutely agonizing to watch. Since my father was a lifelong musician, I had listened to, watched, read, and studied the many findings that have been released regarding how musical connections can keep dementia patients tethered to the world when all else seems to lost to them. (There are countless articles on this topic, and the list is ever expanding, but one easy-to-read overview was released by the NAMM Foundation in 2014. The National Institutes of Health also released a synthesis of the research in 2017.)

I experienced the connections I learned about firsthand. When I would sing questions to my father after his verbal skills became severely impaired, for example, he would answer. Toward the end of his life, as he rested comfortably in hospice, I would hold his hand and sing his favorite songs, and he would vigorously move his hand to the steady beat of those melodies. I knew in my heart the power of music, and I was extremely interested to see how adding young children to the equation would amplify the benefits.

Another reason I was so interested in observing the session at the Center was that the experience centered around the same Kindermusik principles that are embraced by schools across the nation that use our curriculum. I needed to see those lessons with my own eyes to understand exactly how they work. I wanted to feel for myself the enthusiasm of my colleague, Kelly Green, VP of Global Education/Sales and Services, who had worked so tirelessly to get the Williams Center pilot off the ground. 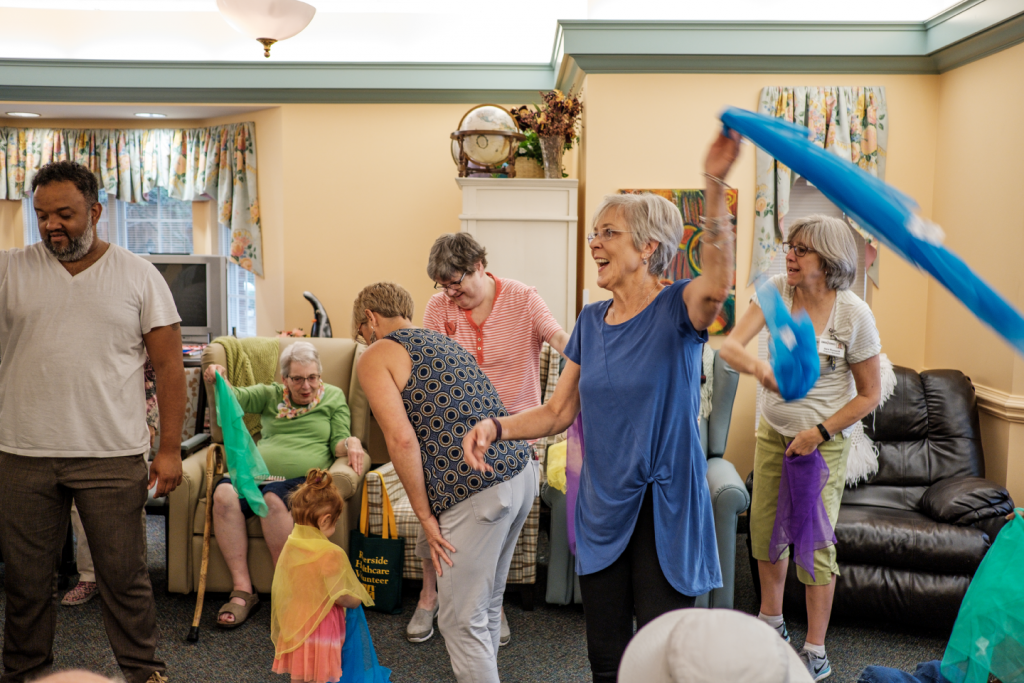 Finally, I wanted to see in action a person who understands just how perfectly these lessons work with seniors: Carol Penney. Carol has been tremendously important to Kindermusik for decades. Her passion for the Kindermusik ways of doing things, her commitment to the constant betterment of our approaches, and her hard work on behalf of the company can never be repaid. So when I heard that it was Carol who had first brought these experiences to the Center—the place where her husband had spent happy times as he fought his own Alzheimer’s battle in the early stages—I knew I needed to witness her facilitate a session and speak with her about her hopes for the future of the program.

What I saw that day moved me to tears. I watched seniors, some of whom were initially quite listless and noncommunicative, literally come to life. Their faces lit up when they saw the children and heard the familiar “Hello” song begin to play. Their eyes shone as they participated however they could in the music and movement opportunities. Their hearts, their moods, their energy levels—I watched all of these lift during the course of their half hour of “Kindermusik time.” 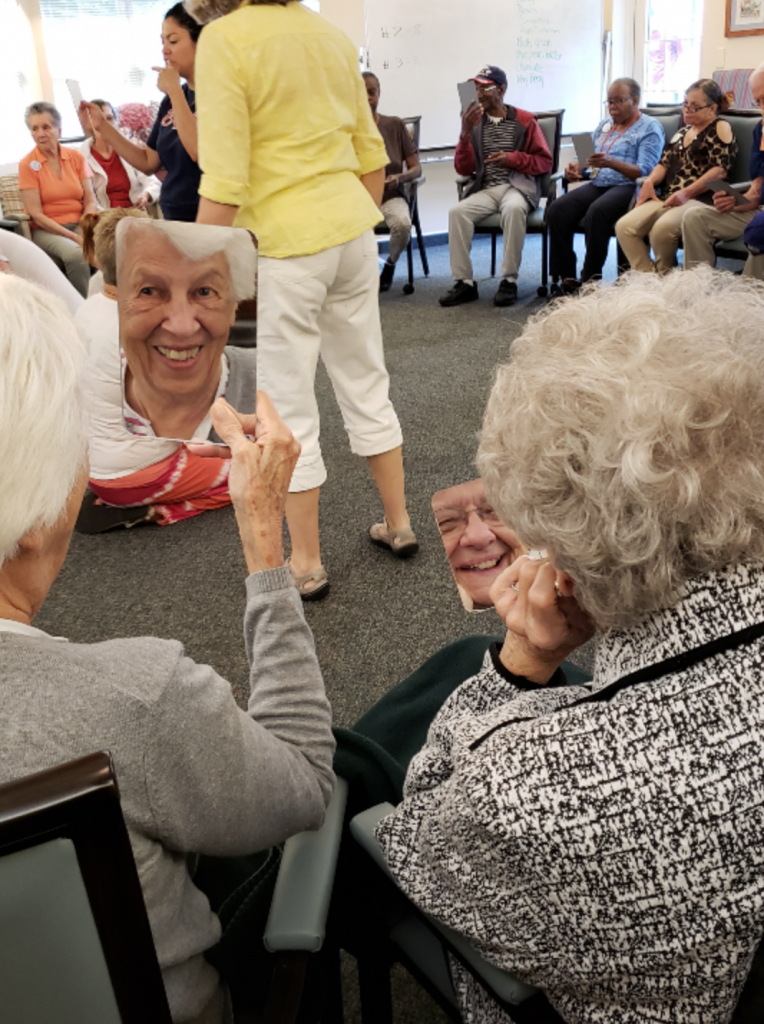 I also observed the joy of the children as they connected with the seniors. I saw that they felt loved and accepted and appreciated—which is exactly how they made the seniors feel! This joy spread as well to Carol and Sara Romanik (Program Specialist at the Center), who were leading the session, to the family members who were present, and…to me, the quiet observer trying so hard to be completely invisible.

Here’s just a small taste of what I saw that day, so you can experience it with your own eyes.

IN SEARCH OF THE PERFECT NAME

Obviously, this experience made clear to me that we needed to move full-steam ahead with making this program available to as many senior centers as possible, as soon as possible. But as we worked out the details of the offering, our team just couldn’t decide on the best name. What word or words could capture something so powerful and emotional, and immediately convey the power of the experience? Finally, a suggestion to name the program Bridges struck a chord with everyone. Because, after all, what is this program if not a bridge…between generations, between people of different backgrounds and experiences, between hearts. Another significant bridge we are hoping to help build with this program is one that links dementia patients, who so often seem isolated and trapped inside themselves, to the outside world.

We are eagerly awaiting the results of a study being done by the Wake Forest School of Medicine regarding the effectiveness of Bridges in improving the quality of life for the seniors participating. Those findings will coincide closely with our release of the program in Fall 2018. We are pleased to unveil the program at an important national conference on aging in Philadelphia in October.

I hope you might be inspired to keep following the Bridges story. Perhaps there’s a senior or young child in your life who would benefit from the Bridges experience. Reach out to Kindermusik so we can keep you informed about senior centers in your area that are adopting the program. Or take the idea to a center where you live. And if you’re lucky enough to experience Bridges firsthand, as I did, I can guarantee that you won’t regret the experience. Just be sure to bring some tissues!