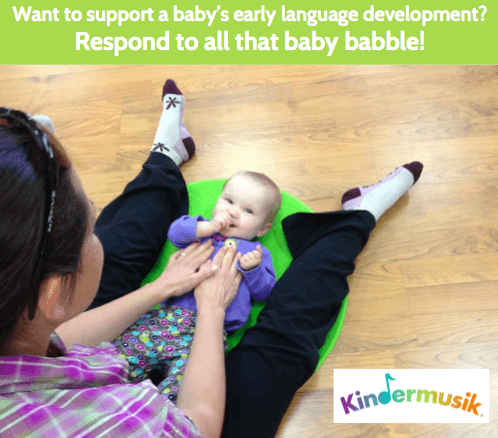 Hang around babies long enough and you start hearing things. From soft sweet coos to long monologues of “dadadadadada,” babies talk a lot—even though we have no idea what they are really saying! That’s okay. We don’t need to understand all the words (or non-words!) to join in the conversation.

How Parents Respond to All that Baby Babble Matters

New early childhood research from the University of Iowa and Indiana University found that how parents respond to all that baby talk can speed up a baby’s vocalizing and language development. That’s great news for those of us no longer fluent in Baby talk.
“It’s not that we found responsiveness matters,” explained co-author Julie Gros-Louis in a press release, “It’s how a mother responds that matters.”
In this six-month-long study, the research team watched the interactions between a dozen mothers and their 8-month-old babies two times a month for 30 minutes. During this free playtime, the researchers monitored how mothers responded to their babies’ positive vocalizations when directed toward them.
Researchers learned that how the mothers respond makes a big difference in the language development of their babies:

Bottom line: Respond to all that baby babble!

How to Answer that Baby Babble with Music

Babies love the sound of their parents’ voices. Parents can feed that love and grow their babies’ use of language at the same time by singing, listening, moving, and dancing to music. After all, music is a language parents and babies both understand.  Musical activities, such as those included in every Kindermusik class, help parents engage with their children and be responsive to them. Here are ways for parent-baby pairs and other caregivers and teachers to use music to support the early language development of babies.
1. Engage in vocal play—one of the earliest stages of language development. Vocal play is how babies’ learn to use the tongue, gums, and jaw muscles needed to produce vowels and consonants. When caregivers participate, too, they expose babies to the sounds that make up our language and encourage them to practice taking turns communicating. Vocal play works best when a parent and baby can see each other’s faces, making it easier for a child to mimic mouth movements. Plus, this eye contact also helps parents and babies bond.
Parenting Tip: Sing “Old MacDonald Had a Farm” with your little one. Pause after key parts of the song, such as “E-I-E-I-O” and wait for your baby to respond. You can also explore the different sounds the animals on the farm make like these families did in Kindermusik class:
[youtube]https://www.youtube.com/watch?v=lsLil1s_wbE[/youtube]
2. Let babies experience steady beat by bouncing to music. The brain processes music in a similar way to how it processes language. Research even shows that children who can repeat and create a steady beat show increased neural responses to speech sounds when compared to other children. Steady beat competency relates to a child’s ability to speak and read fluidly during the school year.
Parenting Tip: Put on some music and bounce to the beat with your baby on your lap or on your hip. This lets babies experience steady beat with their whole bodies. Try one of our favorite lap bounces: Pizza, Pickle, Pumpernickel.
3. Rocking the way to language development. Gently rocking babies throughout those quiet moments of each day gives parents the opportunity to combine vocal play and steady beat—and receive 2x the benefits!
Parenting tip: At the end of the day or after a feeding, hum “Hush Little Baby” (or another favorite lullaby) while you gently rock or sway your little one to the beat. As with “Old MacDonald,” pause during key phrases and wait for your baby to respond. Before too long, your baby will grow into your toddler and be able to “rock” in a new way, like this Kindermusik toddler does at home while listening to music from class!
[youtube]https://www.youtube.com/watch?v=dFP_DVDKezA[/youtube]
Throughout the Kindermusik experience, we use music to help parents engage with their children, be responsive to them, and gain developmental insights and practical tips along the way. After all, a parent is a child’s first and best teacher.

Contributed by Lisa Camino Rowell, a freelance writer living in the Atlanta area.