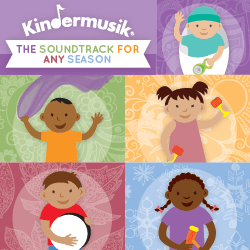 Nothing really prepares a person for the season of life called Parenting. It’s one of those things that no one really tells you. After all, parenting feels a bit like playing a game where the rules change constantly. For example, shortly after mastering the perfect origami-like swaddle, your child no longer needs it to sleep through the night. Or maybe you finally figured out how the straps on the stroller work but now your little one insists on crawling or walking everywhere. Sometimes just when you think you got it figured out, baby number 2 arrives on the scene and well, it changes again! One rule will never change: A parent is a child’s first and best teacher.
In Kindermusik, we celebrate the unique role a parent plays in a child’s life and the life-altering benefits of music throughout each season of parenting and childhood. In fact, even the youngest baby learns through music. One study showed that babies who participate in interactive music classes with their parents smile more, communicate better, are easier to soothe, and show earlier and more sophisticated brain responses to music. That’s not all. Here are four more benefits of music for babies.

4 benefits of music for babies

1. Music supports the early stages of language development.
Contrary to what babies sound like at times, they are not turning into a pterodactyl, a creature from the Amazon rainforest, or a boat. When we hear babies exploring the wide-range of noises possible with the human voice, mouth, and tongue, they are actually engaging in play—vocal play to be specific. Cooing, babbling, blowing raspberries and, well, screeching like a pterodactyl are all part of it.

Vocal play is one of the early stages of language development and parents play a pivotal role. In class, we create many opportunities for vocal play to happen. A baby and caregiver engage in vocal play by touching, gazing, observing, listening, and imitating. All of this vocal play support’s a child’s vocal development by encouraging breath control, the use of the vocal cords, and the coordination of the small muscles in the face and mouth. Plus, the pausing and waiting during vocal play teaches a baby conversational turn-taking.
2. Music helps babies experience patterns. During the first several months of life, babies follow a predictable pattern. Eat. Sleep. Diaper change. Eat. Sleep. Diaper change. Mathematicians call that an A-B-C pattern. Parents call it the “will-I-ever-sleep-again” pattern. (Spoiler alert: You will…one day!) Patterns help babies connect to and learn about the world. From recognizing the facial pattern of two eyes, a nose, and a mouth to hearing the vocal patterns of the common language spoken at home to even responding to the day-and-night pattern and eventually sleeping longer at night (really)!
Babies and young children who learn to identify patterns strengthen their sense of safety and feel happier and more relaxed because they can better predict what happens next. Plus, a solid understanding of patterns eventually leads to success in school, especially in math, science, and reading. Each week in class, babies experience patterns through rhythm and meter, tempo contrasts, dances, language and vocal play and the routine of the lesson flow.
3. Music and movement provide opportunities for fine- and gross-motor skills development
Babies grow by leaps and bounds their first year—or more accurately by grasps and scoots. One minute you hold a newborn who reflexively grasps your finger. Seemingly, the next minute your little baby intentionally reaches up to touch your nose. Whether reaching for a nose, lifting a head during tummy time, clapping, rolling over, sitting up, crawling, or walking, a baby exerts tireless hours to learning how to intentionally move.
Each week in class, we provide many opportunities for a baby to engage in fun, musical activities that support and strengthen each stage of a child’s movement development. From tummy time to playing with baby-safe instruments to gently bouncing a baby in a caregiver’s lap, class activities will support the development of the small and large muscles as well as coordination for more complex movements like eventually kicking a ball, jumping, and even writing.
4. Music helps babies gain active listening skills.
Do you ever just stop and really listen to your surroundings? It’s kind of noisy. You might hear the sounds of music, television commercials, the humming of the refrigerator or air conditioner, birds singing, cars driving by, wind blowing, phones buzzing, coffee maker brewing, microwave dinging, someone talking, and more. Thankfully, as an adult, you know how to tune in to the sounds that matter most. Babies do not. In fact, young babies hear most of it—including the more than 300 different phonemes, tones, and clicks used to express every single language in the world!
At Kindermusik, we know babies need to learn how to tune in to the sounds and language most needed in their daily lives. In fact, a baby can already distinguish the sound of a parent’s voice from everyone else’s voice. In class each week, we enhance a baby’s growing discriminatory listening skills when we listen to and imitate different animal noises, the various sounds of instruments, and the voices of adults singing and humming. This ability to detect and attend to sounds, and to distinguish between them, sets a baby on the path to fine-tuned listening and receptive language.

Becoming a parent turns a person’s world (and social calendar) upside down and inside out. A person moves from lengthy conversations over dinner to brief chats scheduled around naptimes. Eventually, a parent progress to speaking in short sentences interrupted by wardrobe and diaper changes, boo-boo kissing, rocking, sharing interventions, and a few paparazzi moments. (Children do the cutest things after all!).
When enrolling in Kindermusik, many parents list “socialization” as one of the reasons. We do help children develop social and emotional skills, but we also connect grownups with parents and caregivers who understand the unique joys and challenges of parenting a child the same age. In Kindermusik class, parents often make lasting connections of their own with the grownup sitting next to them or changing a diaper or kissing a boo-boo or experiencing a paparazzi moment, too.

Experience for yourself the benefits of music for babies (and parents!). Contact a local Kindermusik educator and visit a class!

Contributed by Lisa Camino Rowell, a freelance writer living in the Atlanta area.

2 Replies to “4 benefits of music for babies”