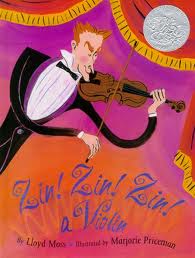 We agree with Lloyd Moss: “It’s music that we all adore.” At Kindermusik International, we love music for music’s sake and for its ability to touch the hearts, souls, and minds of young children and families. Music can support early language development, increase phonemic awareness, and even profoundly impact children with special needs.

So make a resolution to gather your children together—whether at home or in the classroom—for musical story times that will support early literacy development and their love of music! Below you will find some of our favorite musical stories, including a Caldecott Winner, Reading Rainbow selections, audio story, and even a book written by a Kindermusik educator.

Music as the vehicle for early literacy development

ABC Music & Me also increases parent involvement in early childhood education by providing families each month with the music from class as well as a Family Activity Guide (available in English and Spanish) that includes the story from class.

For more information about using ABC Music & Me to support early literacy development while also increasing parental involvement in early childhood education, email us at info@abcmusicandme.com.