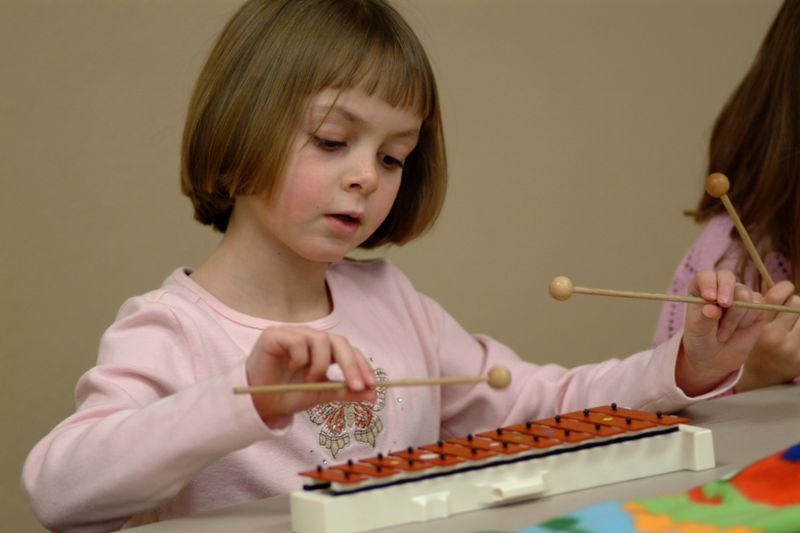 At about the age of five, many children are ready for first experiences with a melodic instrument. Eye-hand coordination is improving, melodic memory is stronger, and the child has a keen interest in re-creating the melodies he or she sings and hears. Because of its size and delightful sound quality, the glockenspiel is an ideal first melodic instrument for young children and will be used throughout all four semesters of the program. However, the child’s success with this instrument is very much dependent upon careful preparation, a highly sequential approach to its use, and encouraging reinforcement at home.

In Semester 1 of the Young Child curriculum, long before the glockenspiels go home with the children, there are many experiences that nurture a level of beat competency and basic melodic memory that help to ensure success for each child at the glockenspiel. Of utmost importance in this process is the notion that children play from musical memory rather than by simultaneous reading and playing. This is not to say that children do not learn to read musical notation. On the contrary, children learn to read notation vocally and to commit to memory what they have read and heard many times. From this musical memory, the child approaches the glockenspiel with patterns so familiar that full concentration can be placed on the actual manipulation of the instrument.

Of course, learning to read and play simultaneously is a skill all musicians need to develop.

However, very few children at this stage of development are ready for this highly integrated skill. This skill will develop naturally in most children as the processes of sensory integration are refined, but this rarely happens before the age of seven or eight.

The preparation for glockenspiel playing takes place over the first thirteen weeks of Semester 1. Steady beat activities, simple ensembles, and a repertoire of songs provide the foundation for successful first experiences in Lesson 13. From Lesson 13 until the end of the second semester, glockenspiels will be used in each lesson.

Things to consider when working with the glockenspiel: END_OF_DOCUMENT_TOKEN_TO_BE_REPLACED 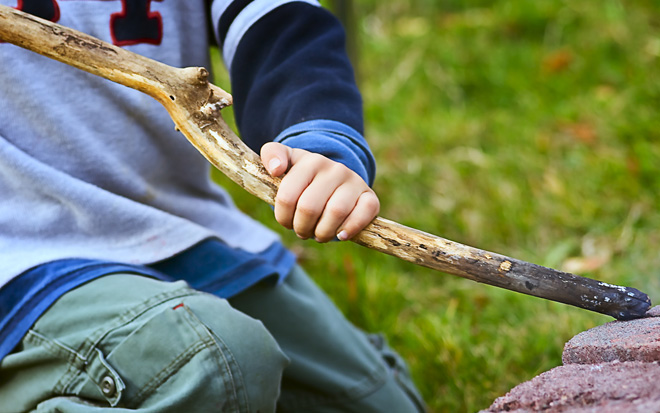 Any normal Mom can be driven quickly insane by the annual Christmas toy craze. If I hear my 5 year old exclaim, "I want that!" during another toy commercial, well, it just might throw me over the edge. I came across an article on Facebook titled: "The 5 Best Toys of All Time" and noticed it had been shared by a number of my friends, including some of our top Kindermusik educators. I figured this article must include some great toys that are educational, musical, imaginative and would help me finish my Christmas shopping. What I found was even better… END_OF_DOCUMENT_TOKEN_TO_BE_REPLACED 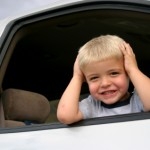 “Are we there yet?!?!?!”
Sound familiar? We all know road trips can be tough with little ones. So, considering we have entered the heaviest traveled season of the year, it’s time to gather up some songs, toys, and games for those long car rides. We at Kindermusik have a few ideas to help make a long car trip just a little more fun & musical for your child, which means travel gets just a little easier for you!
We asked our community to tell us their favorite Kindermusik song that they listen to in the car. Below is the Kindermusik Road Trip Playlist, which we compiled out of your favorites. You can download the below kids songs right off play.kindermusik.com to build your own portable road trip playlist.
The Kindermusik Road Trip Playlist

Give your child the gift of music by adding in holiday song downloads for your holiday playlist!

We also built an interactive Kindermusik Kids Music Radio mobile application to try to bring the benefits of Kindermusik to your home and car. You can download this to your iPhone, iPod, or iPad. There are multiple radio stations, over 100 Kindermusik songs, and interactive instrument buttons within the app to allow your little one to practice their steady beat!
Safe travels!

This activity for toddlers 12 to 18 months is a great one for the child who LOVES to mimic! At this age, your little one loves to imitate you. Daddy Says (or Mommy Says) is like the well-known game “Simon Says.” But, it’s better because it’s led by Daddy or Mommy! Encourage your child to imitate you as you wiggle your fingers, stomp your feet, wave your hands, flap your arms, or shake your head. Toddlers learn by doing! Engaging games that link movement and words help your toddler learn words faster.
Kindermusik music classes are another great ways for parents to bond with their children. Find out how to be a part of the world’s largest & most researched musical learning program or sign up for a free class, a no commitment, fun activity to do with your toddler anytime!

Here’s a little activity from Kindermusik that you can do to bond with your baby and help with baby’s digestion, circulation, and even mood!
Position your baby on his back. Beginning with your hands at the top of your baby’s chest, slowly move your hands outward and down, in the shape of a  heart, to gently warm up his mid-body. Sing or hum Twinkle, Twinkle Little Star or another favorite lullaby as you continue to move your hands slowly outward and down. This type of loving touch stimulates healthy levels of stress hormone in your baby’s brain and aids his digestion and circulation.
More activities for babies, toddlers, and kids to come!

One of those rainy days? We’re going to start giving away some of our best Kindermusik activities for you to do at home with your children in the comfort of your own home! Keep an eye out for activities for babies, toddlers, and young kids!

Scatter several hula hoops on the ground or floor. One person is the “drummer leader”—drumming on a box, trash can, bucket, or hand drum. As long as the drummer is just playing a beat, the other players walk between and around the hoops. On a loud bang, everyone find a hula hoop and quickly jumps in it. Take turns being the drummer leader. Try running, leaping, skipping, hopping, twirling and other ways to move between and around the hoops. This activity combines sound, movement, cues, and social interaction, helping preschoolers develop their attention skills.

Keep an eye out for more Rainy Day Activities for Kids, Babies, & Toddlers! 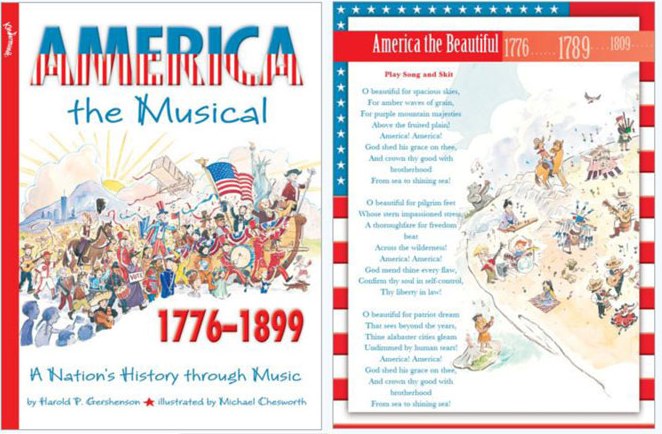 Who was Yankee Doodle anyway? Many of you have been singing these ballads by heart for years. Now you can get the real story behind songs like “Oh! Susannah“ and “This Land Is Your Land.” Take a musical journey through history and learn about the cultures, politics, and lifestyles of the people who settled America and inspired the famous lyrics.

You will delight in exploring the pages of this book through interactive touch. You”ll hear stories, listen to music, watch short, funny video clips about “Amazing Presidents,” and interact with historical figures like Paul Revere and Lewis and Clark who are brought to life through imaginative dialogue and entertaining character voices.

Penned in kid-friendly language and filled with odd, interesting facts sure to delight young listeners (one president had hippo bones and cow’s teeth in his mouth!), this interactive app is an unforgettable musical history lesson that brings ten decades of the American story to life with vivid characters, engaging and humorous dialogue, Monty-Python-style videos, and ten favorite American folk songs.

Click here to check it out now in the iTunes store! Available now for just $6.99. We hope you enjoy! 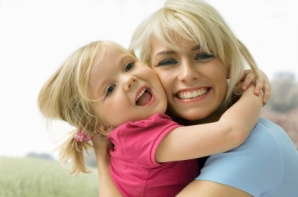 Several years ago at the Kindermusik Educator Convention in San Antonio, TX, Dr. Carla Hannaford, Ph.D., talked about the absence of touch in many early childhood care environments. Young children today will often be reprimanded for touching, holding hands, hugging, and being given the freedom to wrestle and topple over each other. Dr. Hannaford asserted that all of these actions are actually essential for spatial awareness and strengthening neural wires in the brain.

In the spirit of Dr. Hannaford’s ideas, we wanted to share two musical activities that involve touch and physical contact. These activities were pulled from the Huggies Happy Baby site under an article called Toddlers Express Themselves through Dance.

Activity 1: Musical Hugs
To play, put on some music and dance around with your little one(s). Dance any way you want. At a random moment, pause the music and hug! Then start the music back up and get dancing again.

If you have lots of family members or kids playing, everyone hugs whoever is closest to them. If you’re having a birthday party with lots of kids attending, consider playing this game instead of Musical Chairs. Musical hugs allows everyone to play and doesn’t result in any “losers” like Musical Chairs does. This game also promotes listening skills and practice with starting and stopping. The added bonus is the positive physical contact, which strengthens the bond between you and your toddler.

Activity 2: Musical Partners
A variation on the above game, this requires players to find each other, hold hands and sit down until the music starts again! If you have several players, the game also can be played in two circles, one inside the other (one partner in the inside circle and one in the outside). When the music starts, the circles move in opposite directions. When it stops, the children run to their partners, hold hands and sit down.

Try one of these activities today, or make up your own game. Either way, don’t be afraid of squeezing those little ones tight!