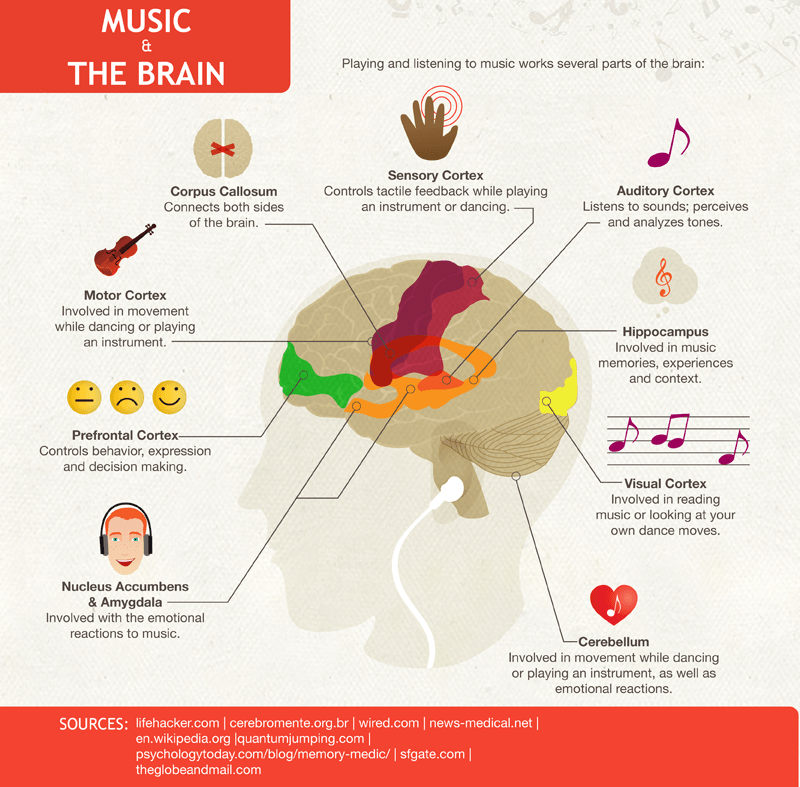 They say a picture is worth a 1000 words, but in this case, it’s an infographic that’s worth 1000 words, so we’ll keep this post brief and to the point.

At FinerMinds.com, the team explored the many effects of music on the brain, specifically those effects caused by playing and listening to music – things our Kindermusik families do every week in Kindermusik class and in their daily routines at home.

Music Stimulates 9 Parts of the Brain

Music is such an important part of every culture around the world that no one can argue with the impact or benefits of music.  But what this infographic illustrates so vividly are those specific parts of the brain that are affected.  According to these authors, there are nine parts of the brain (nine – count them!) that are stimulated while playing and listening to music.  Astounding!

There’s no doubt that music makes a difference cognitively, physically, and emotionally.  And experts tell us that the younger a child is exposed to music and music-making, the better.
That’s one of the reasons why the Kindermusik curricula are specifically designed to capitalize on those effects through a developmentally appropriate, whole-child based approach.  With that in mind, we leave you with this statement from psychologist Richard Davidson when he was a professor at the University of Wisconsin:

“The brain is the only organ designed to change in response to experience.  Musical training changes the structure of the brain and when it begins earlier in life the greater the influence.”

Want to get your child involved in music to help their brain development? Find a Kindermusik Class today!